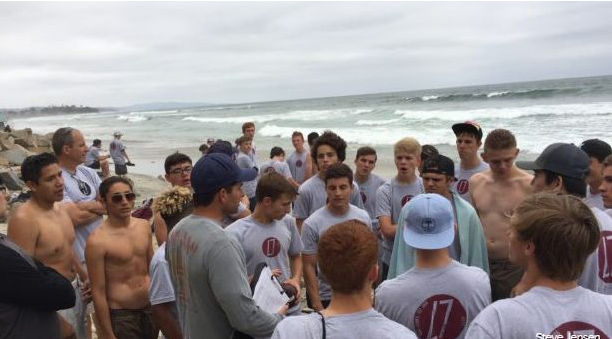 SAN DIEGO — Every summer, a growing group of teens drives from Utah to the Pacific Ocean for surf camp.­

But surfing isn’t the most important part of the week. It’s what else happens while they are there that sticks with them for life. On a beach near San Diego, dozens of teenage boys met for the first time this summer. They got put onto teams, and for five days they learned how to surf but also had drills, games and devotionals and learned leadership, teamwork and service.

There was even yoga at night on the sand.

Edman will be a senior in high school this year. He went back for a second year of Lucky Sevan Expedition Surf Camp because he loved it so much.

“It’s hard to get out past where the waves are crashing, but when you catch that first wave it’s like, whoa. It’s weird, it’s like you are floating on nothing,” he said.

“If you do get up, there’s that rush of accomplishing something, so there are life lessons there. But as you hang out waiting for the waves with the mentors, you get to talk,” said Steve Jensen, who was one of the mentors this year at the camp.

Jensen is one of Edman’s Young Men’s leaders in their ward of The Church of Jesus Christ of Latter-day Saints in American Fork. The young men had to convince leadership to do this experience instead of another high adventure camp or experience in Utah.

“Yes there’s surfing, but it’s a backdrop for these other things. There’s a tie-in that this would be a spiritual experience to help them at the crossroads of their life,” said Jensen.

The camp was started 11 years ago by Evan Rogers of Tempe, Arizona. He says it’s for all faiths, and he co-founded it as a way to help teenage boys without a father or a strong role model. Now they have a camp for girls, too.

Edman says it was a full five days unplugged, without his phone or electronics, and it was incredible.

“I learned how to respect others more, and how to listen more to other people and open up,” he said.